A work of remarkable scope and depth of learning. [Dorman's] principal contribution is wise, imaginative, and often revelatory readings of published texts.--Journal of Southern History

"[Dorman] skillfully recreates--and acutely analyzes--the fascinating story of one of American political and cultural history's forgotten but most appealing alternatives.--Journal of American History

"Dorman has provided a useful and insightful synthesizing study of the major versions, actors, streams, and manifestations of regionalism in the interwar period.--American Historical Review

"An innovative, insightful, and important study that should long serve as a beacon for others to follow.--Environmental History

"Regionalism surely stands among the most influential cultural movements in twentieth-century America, yet to date it has received surprisingly little attention. With his extensive research, thoughtful insights, and artful prose, Robert Dorman has provided us with a truly first-rate study that should represent the definitive word on American regionalism for years to come.--Daniel J. Singal, author of The War Within: From Victorian to Modernist Thought in the South, 1919-1945 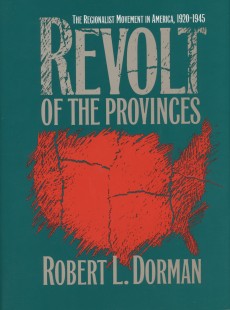 Revolt of the Provinces