General Richard Stoddert Ewell holds a unique place in the history of the Army of Northern Virginia. For four months Ewell was Stonewall Jackson's most trusted subordinate; when Jackson died, Ewell took command of the Second Corps, leading it at Gettysburg, the Wilderness, and Spotsylvania Court House.

In this biography, Donald Pfanz presents the most detailed portrait yet of the man sometimes referred to as Stonewall Jackson's right arm. Drawing on a rich array of previously untapped original source materials, Pfanz concludes that Ewell was a highly competent general, whose successes on the battlefield far outweighed his failures.

But Pfanz's book is more than a military biography. It also examines Ewell's life before and after the Civil War, including his years at West Point, his service in the Mexican War, his experiences as a dragoon officer in Arizona and New Mexico, and his postwar career as a planter in Mississippi and Tennessee. In all, Pfanz offers an exceptionally detailed portrait of one of the South's most important leaders. 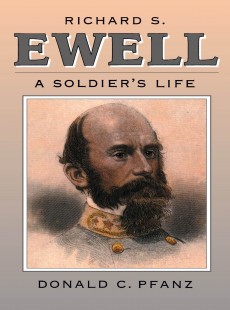