The Battle of Chickamauga was the third bloodiest of the American Civil War and the only major Confederate victory in the conflict's western theater. It pitted Braxton Bragg's Army of Tennessee against William S. Rosecrans's Army of the Cumberland and resulted in more than 34,500 casualties. In this first volume of an authoritative two-volume history of the Chickamauga Campaign, William Glenn Robertson provides a richly detailed narrative of military operations in southeastern and eastern Tennessee as two armies prepared to meet along the "River of Death." Robertson tracks the two opposing armies from July 1863 through Bragg's strategic decision to abandon Chattanooga on September 9. Drawing on all relevant primary and secondary sources, Robertson devotes special attention to the personalities and thinking of the opposing generals and their staffs. He also sheds new light on the role of railroads on operations in these landlocked battlegrounds, as well as the intelligence gathered and used by both sides.

Delving deep into the strategic machinations, maneuvers, and smaller clashes that led to the bloody events of September 19@–20, 1863, Robertson reveals that the road to Chickamauga was as consequential as the unfolding of the battle itself. 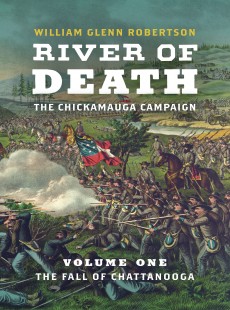 Volume 1: The Fall of Chattanooga