Dating back to the nineteenth-century transplantation of a latex-producing tree from the Amazon to Southeast Asia, rubber production has wrought monumental changes worldwide. During a turbulent Vietnamese past, rubber transcended capitalism and socialism, colonization and decolonization, becoming a key commodity around which life and history have revolved. In this pathbreaking study, Michitake Aso narrates how rubber plantations came to dominate the material and symbolic landscape of Vietnam and its neighbors, structuring the region's environment of conflict and violence. Tracing the stories of agronomists, medical doctors, laborers, and leaders of independence movements, Aso demonstrates how postcolonial socialist visions of agriculture and medicine were informed by their colonial and capitalist predecessors in important ways. As rubber cultivation funded infrastructural improvements and the creation of a skilled labor force, private and state-run plantations became landscapes of oppression, resistance, and modernity.

Synthesizing archival material in English, French, and Vietnamese, Aso uses rubber plantations as a lens to examine the entanglements of nature, culture, and politics and demonstrates how the demand for rubber has impacted nearly a century of war and, at best, uneasy peace in Vietnam. 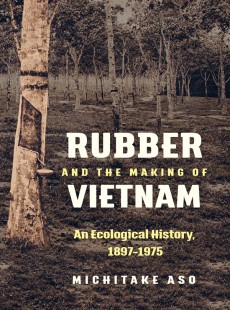 Rubber and the Making of Vietnam