Elite-level Soviet politics, privileged access to state secrets, knowledge about machinations inside the Kremlin—such is the environment in which Andrei A. Kovalev lived and worked. In this memoir of his time as a diplomat in key capacities and as a member of Mikhail Gorbachev's staff, Kovalev reveals hard truths about his country as only a perceptive witness can. In Russia's Dead End, Kovalev shares his intimate knowledge of political activities behind the scenes at the Ministry of Foreign Affairs and the Kremlin before the dissolution of the USSR in December 1991 and afterward, including during the administration of Vladimir Putin.Kovalev analyzes Soviet efforts to comply with international human-rights obligations, the machinations of the KGB, and the link between corrupt oligarchs and state officials. He documents the fall of the USSR and the post-Soviet explosion of state terrorism and propaganda, and offers a nuanced historical explanation of the roots of Russia's contemporary crisis under Vladimir Putin. This insider's memoir provides a penetrating analysis of late-Soviet and post-Soviet Russian politics that is pungent, pointed, witty, and accessible. It assesses the current dangerous status of Russian politics and society while illuminating the path to a more just and democratic future. 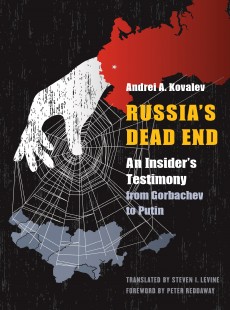 An Insider's Testimony from Gorbachev to Putin