In this wide-ranging and carefully curated anthology, Daniel M. Cobb presents the words of Indigenous people who have shaped Native American rights movements from the late nineteenth century through the present day. Presenting essays, letters, interviews, speeches, government documents, and other testimony, Cobb shows how tribal leaders, intellectuals, and activists deployed a variety of protest methods over more than a century to demand Indigenous sovereignty. As these documents show, Native peoples have adopted a wide range of strategies in this struggle, invoking "American" and global democratic ideas about citizenship, freedom, justice, consent of the governed, representation, and personal and civil liberties while investing them with indigenized meanings.

The more than fifty documents gathered here are organized chronologically and thematically for ease in classroom and research use. They address the aspirations of Indigenous nations and individuals within Canada, Hawaii, and Alaska as well as the continental United States, placing their activism in both national and international contexts. The collection's topical breadth, analytical framework, and emphasis on unpublished materials offer students and scholars new sources with which to engage and explore American Indian thought and political action. 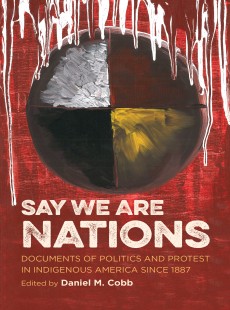 Say We Are Nations

Documents of Politics and Protest in Indigenous America since 1887