In the decades before the Civil War, Charleston, South Carolina, enjoyed recognition as the center of scientific activity in the South. By 1850, only three other cities in the United States--Philadelphia, Boston, and New York--exceeded Charleston in natural history studies, and the city boasted an excellent museum of natural history. Examining the scientific activities and contributions of John Bachman, Edmund Ravenel, John Edwards Holbrook, Lewis R. Gibbes, Francis S. Holmes, and John McCrady, Lester Stephens uncovers the important achievements of Charleston's circle of naturalists in a region that has conventionally been dismissed as largely devoid of scientific interests.

Stephens devotes particular attention to the special problems faced by the Charleston naturalists and to the ways in which their religious and racial beliefs interacted with and shaped their scientific pursuits. In the end, he shows, cultural commitments proved stronger than scientific principles. When the South seceded from the Union in 1861, the members of the Charleston circle placed regional patriotism above science and union and supported the Confederate cause. The ensuing war had a devastating impact on the Charleston naturalists--and on science in the South. The Charleston circle never fully recovered from the blow, and a century would elapse before the South took an equal role in the pursuit of mainstream scientific research. 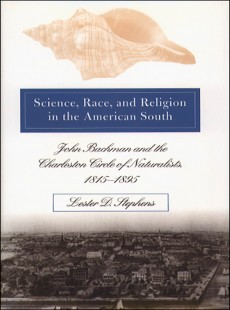 Science, Race, and Religion in the American South

John Bachman and the Charleston Circle of Naturalists, 1815-1895