Classical music was central to German national identity in the early twentieth century. The preeminence of composers such as Bach and Beethoven and artists such as conductor Wilhelm Furtwangler and pianist Walter Gieseking was cited by the Nazis as justification for German expansionism and as evidence of Aryan superiority. In the minds of many Americans, further German aggression could be prevented only if the population's faith in its moral and cultural superiority was shattered. In Settling Scores, David Monod examines the attempted "denazification" of the German music world by the Music Control Branch of the Information Control Division of Military Government.

The occupying American forces barred from the stage and concert hall all former Nazi Party members and even anyone deemed to display an "authoritarian personality." They also imported European and American music. These actions, however, divided American officials and outraged German audiences and performers. Nonetheless, the long-term effects were greater than has been previously recognized, as German government officials regained local control and voluntarily limited their involvement in artistic life while promoting "new" (anti-Nazi) music. 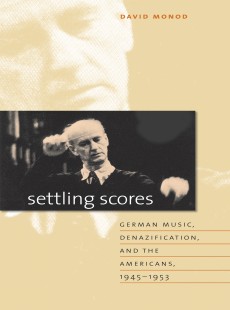