Placing sexual culture at the center of power relations in Revolutionary-era Philadelphia, Clare A. Lyons uncovers a world where runaway wives challenged their husbands' patriarchal rights and where serial and casual sexual relationships were commonplace. By reading popular representations of sex against actual behavior, Lyons reveals the clash of meanings given to sex and illuminates struggles to recast sexuality in order to eliminate its subversive potential.

Sexuality became the vehicle for exploring currents of liberty, freedom, and individualism in the politics of everyday life among groups of early Americans typically excluded from formal systems of governance--women, African Americans, and poor classes of whites. Lyons shows that men and women created a vibrant urban pleasure culture, including the eroticization of print culture, as eighteenth-century readers became fascinated with stories of bastardy, prostitution, seduction, and adultery. In the post-Revolutionary reaction, white middle-class men asserted their authority, Lyons argues, by creating a gender system that simultaneously allowed them the liberty of their passions, constrained middle-class women with virtue, and projected licentiousness onto lower-class whites and African Americans.

Lyons's analysis shows how class and racial divisions fostered new constructions of sexuality that served as a foundation for gender. This gendering of sexuality in the new nation was integral to reconstituting social hierarchies and subordinating women and African Americans in the wake of the Revolution. 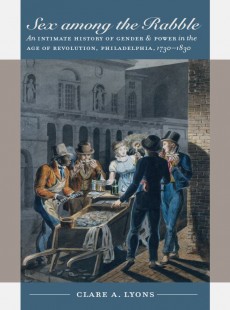 Sex among the Rabble

An Intimate History of Gender and Power in the Age of Revolution, Philadelphia, 1730-1830