The Primeiro Comando do Capital (PCC) is a Sao Paulo prison gang that since the 1990s has expanded into the most powerful criminal network in Brazil. Karina Biondi's rich ethnography of the PCC is uniquely informed by her insider-outsider status. Prior to his acquittal, Biondi's husband was incarcerated in a PCC-dominated prison for several years. During the period of Biondi's intense and intimate visits with her husband and her extensive fieldwork in prisons and on the streets of Sao Paulo, the PCC effectively controlled more than 90 percent of Sao Paulo's 147 prison facilities.

Available for the first time in English, Biondi's riveting portrait of the PCC illuminates how the organization operates inside and outside of prison, creatively elaborating on a decentered, non-hierarchical, and far-reaching command system. This system challenges both the police forces against which the PCC has declared war and the methods and analytic concepts traditionally employed by social scientists concerned with crime, incarceration, and policing. Biondi posits that the PCC embodies a "politics of transcendence," a group identity that is braided together with, but also autonomous from, its decentralized parts. Biondi also situates the PCC in relation to redemocratization and rampant socioeconomic inequality in Brazil, as well as to counter-state movements, crime, and punishment in the Americas. 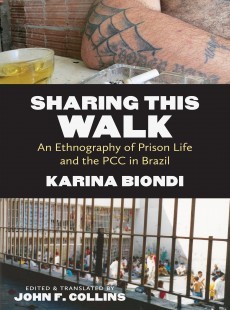 An Ethnography of Prison Life and the PCC in Brazil