John C. Frémont was the most celebrated explorer of his era. In 1842, on the first of five expeditions he would lead to the Far West, Frémont and a small party of men journeyed up the Kansas and Platte Rivers to the Wind River Range in Wyoming. At the time, virtually this entire region was known as the Great Desert, and many Americans viewed it and the Rocky Mountains beyond as natural barriers to the United States. After Congress published Frémont's official report of the expedition, however, few doubted the nation should expand to the Pacific.         The first in-depth study of this remarkable report, Sight Unseen argues that Frémont used both a radical form of art and an imaginary map to create an aesthetic desire for expansion. He not only redefined the Great Desert as a novel and complex environment, but on a summit of the Wind River Range, he envisioned the Continental Divide as a feature that would unify rather than impede a larger nation.         In addition to provoking the great migration to Oregon and providing an aesthetic justification for the National Park system, Frémont's report profoundly altered American views of geography, progress, and the need for a transcontinental railroad. By helping to shape the very notion of Manifest Destiny, the report became one of the most important documents in the history of American landscape. 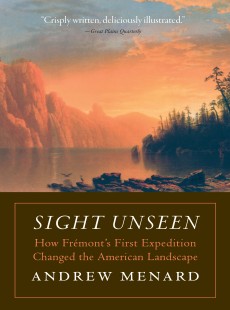