Based on extensive fieldwork in the community of the Eastern Band of Cherokee Indians in western North Carolina, this book uses a semiotic approach to investigate the historic and contemporary role of the Sequoyan syllabary--the written system for representing the sounds of the Cherokee language--in Eastern Cherokee life.

The Cherokee syllabary was invented in the 1820s by the respected Cherokee Sequoyah. The syllabary quickly replaced alternative writing systems for Cherokee and was reportedly in widespread use by the mid-nineteenth century. After that, literacy in Cherokee declined, except in specialized religious contexts. But as Bender shows, recent interest in cultural revitalization among the Cherokees has increased the use of the syllabary in education, publications, and even signage.

Bender also explores the role played by the syllabary within the ever more important context of tourism. (The Eastern Cherokee Band hosts millions of visitors each year in the Great Smoky Mountains.) English is the predominant language used in the Cherokee community, but Bender shows how the syllabary is used in special and subtle ways that help to shape a shared cultural and linguistic identity among the Cherokees. Signs of Cherokee Culture thus makes an important contribution to the ethnographic literature on culturally specific literacies. 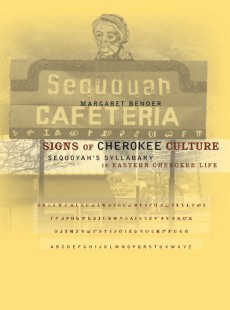