In Mexico environmental struggles have been fought since the nineteenth century in such places as Zacatecas, where United States and European mining interests have come into open conflict with rural and city residents over water access, environmental health concerns, and disease compensation. In Silver Veins, Dusty Lungs, Rocio Gomez examines the detrimental effects of the silver mining industry on water resources and public health in the city of Zacatecas and argues that the human labor necessary to the mining industry made the worker and the mine inseparable through the land, water, and air. Tensions arose between farmers and the mining industry over water access while the city struggled with mudslides, droughts, and water source contamination. Silicosis-tuberculosis, along with accidents caused by mining technologies like jackhammers and ore-crushers, debilitated scores of miners. By emphasizing the perspective of water and public health, Gomez illustrates that the human body and the environment are not separate entities but rather in a state of constant interaction. 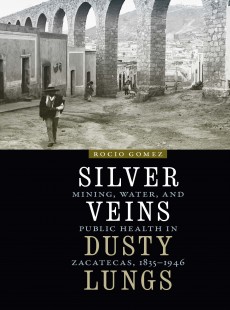