Giving close consideration to previously neglected debates, Matthew Mason challenges the common contention that slavery held little political significance in America until the Missouri Crisis of 1819. Mason demonstrates that slavery and politics were enmeshed in the creation of the nation, and in fact there was never a time between the Revolution and the Civil War in which slavery went uncontested.

The American Revolution set in motion the split between slave states and free states, but Mason explains that the divide took on greater importance in the early nineteenth century. He examines the partisan and geopolitical uses of slavery, the conflicts between free states and their slaveholding neighbors, and the political impact of African Americans across the country. 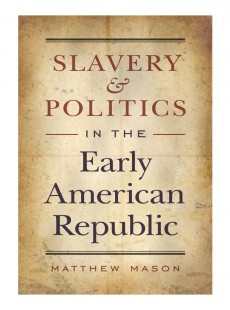 Slavery and Politics in the Early American Republic