America's legal consciousness was high during the era that saw the imprisonment of abolitionist editor William Lloyd Garrison, the execution of slave revolutionary Nat Turner, and the hangings of John Brown and his Harpers Ferry co-conspirators. Jeannine Marie DeLombard examines how debates over slavery in the three decades before the Civil War employed legal language to "try" the case for slavery in the court of public opinion via popular print media.

Discussing autobiographies by Frederick Douglass, a scandal narrative about Sojourner Truth, an abolitionist speech by Henry David Thoreau, sentimental fiction by Harriet Beecher Stowe, and a proslavery novel by William MacCreary Burwell, DeLombard argues that American literature of the era cannot be fully understood without an appreciation for the slavery debate in the courts and in print. Combining legal, literary, and book history approaches, Slavery on Trial provides a refreshing alternative to the official perspectives offered by the nation's founding documents, legal treatises, statutes, and judicial decisions. DeLombard invites us to view the intersection of slavery and law as so many antebellum Americans did--through the lens of popular print culture. 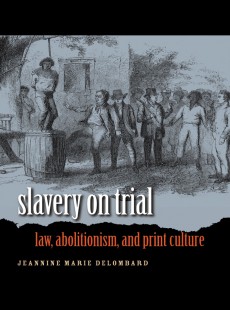