At the turn of the twentieth century, an emerging consumer culture in the United States promoted constant spending to meet material needs and develop social identity and self-cultivation. In Sold American, Charles F. McGovern examines the key players active in shaping this cultural evolution: advertisers and consumer advocates. McGovern argues that even though these two professional groups invented radically different models for proper spending, both groups propagated mass consumption as a specifically American social practice and an important element of nationality and citizenship.

Advertisers, McGovern shows, used nationalist ideals, icons, and political language to define consumption as the foundation of the pursuit of happiness. Consumer advocates, on the other hand, viewed the market with a republican-inspired skepticism and fought commercial incursions on consumer independence. The result, says McGovern, was a redefinition of the citizen as consumer. The articulation of an "American Way of Life" in the Depression and World War II ratified consumer abundance as the basis of a distinct American culture and history. 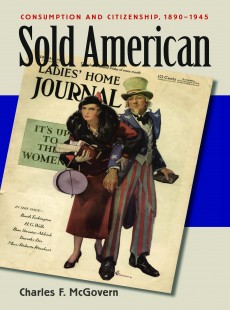