In Soldiering in the Army of Tennessee Larry Daniel offers a view from the trenches of the Confederate Army of Tennessee. his book is not the story of the commanders, but rather shows in intimate detail what the war in the western theater was like for the enlisted men. Daniel argues that the unity of the Army of Tennessee--unlike that of Robert E. Lee's Army of Northern Virginia--can be understood only by viewing the army from the bottom up rather than the top down.

The western army had neither strong leadership nor battlefield victories to sustain it, yet it maintained its cohesiveness. The "glue" that kept the men in the ranks included fear of punishment, a well-timed religious revival that stressed commitment and sacrifice, and a sense of comradeship developed through the common experience of serving under losing generals.

The soldiers here tell the story in their own rich words, for Daniel quotes from an impressive variety of sources, drawing upon his reading of the letters and diaries of more than 350 soldiers as well as scores of postwar memoirs. They write about rations, ordnance, medical care, punishments, the hardships of extensive campaigning, morale, and battle. While eastern and western soldiers were more alike than different, Daniel says, there were certain subtle variances. Western troops were less disciplined, a bit rougher, and less troubled by class divisions than their eastern counterparts. Daniel concludes that shared suffering and a belief in the ability to overcome adversity bonded the soldiers of the Army of Tennessee into a resilient fighting force. 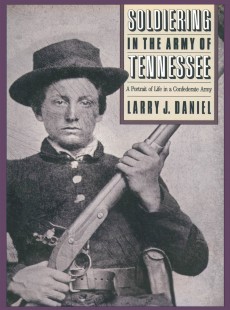 Soldiering in the Army of Tennessee

A Portrait of Life in a Confederate Army