In 1860, Somerset Place was one of the most successful plantations in North Carolina--and its owner one of the largest slaveholders in the state. More than 300 slaves worked the plantation's fields at the height of its prosperity; but nearly 125 years later, the only remembrance of their lives at Somerset, now a state historic site, was a lonely wooden sign marked "Site of Slave Quarters."

Somerset Homecoming, first published in 1989, is the story of one woman's unflagging efforts to recover the history of her ancestors, slaves who had lived and worked at Somerset Place. Traveling down winding southern roads, through county courthouses and state archives, and onto the front porches of people willing to share tales handed down through generations, Dorothy Spruill Redford spent ten years tracing the lives of Somerset's slaves and their descendants. Her endeavors culminated in the joyous, nationally publicized homecoming she organized that brought together more than 2,000 descendants of the plantation's slaves and owners and marked the beginning of a campaign to turn Somerset Place into a remarkable resource for learning about the history of both African Americans and whites in the region. 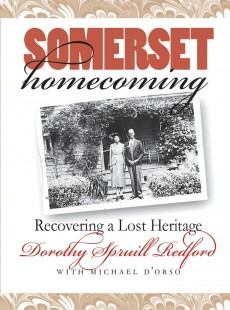