In the Spring 2012 issue of Southern Cultures…

Every Ounce a Man's Whiskey?: Bourbon in the White Masculine South
by Sean S. McKeithan
"The hot bite of the Bourbon sensuously connects the body of the drinker to nation, region, and locale, enjoining his experience with those of imagined, historical bodies, soaking up space and place in the slow burn of what appears an endless southern summertime."

Native Ground: Photographs by Rob McDonald
"If convention has it right, these are writers who bear something close to a genetic
predisposition to produce a literature suffused with place."

Turned Inside Out: Black, White, and Irish in the South
by Bryan Giemza
"As a place where Black and Green were in perpetual contact, the Atlantic South furnishes an ideal case study in how these peoples moved with, against, and around one another."

"God First, You Second, Me Third": An Exploration of "Quiet Jewishness"at Camp Wah- Kon- Dah
by Marcie Cohen Ferris
"This was an anxious time for American Jews, stung by the anti- Semitic quotas and discrimination of the interwar years and the growing horror regarding the fate of European Jewry as the Holocaust came to light in the 1940s."

"A Mind- Opening Influence of Great Importance": Arthur Raper at Agnes Scott College
by Clifford M. Kuhn
"He was such an eye- opener to me . . . such a reversal of the whole way you think about life
and society."

"For the Scrutiny of Science and the Light of Revelation": American Blood Falls
by Tom Maxwell
"Showers of blood, however dreadful, were not news. Pliny, Cicero, Livy, and Plutarch mentioned rains of blood and flesh. Zeus makes it rain blood, 'as a portent of slaughter,'
in Homer's Iliad."

Mason- Dixon Lines Bourbon
Poetry by R. T. Smith
". . . Earl was a steady liar who never in his life solved a single crime, to hear my father tell it, an improvident soul prone to nocturnal misdemeanors himself . . ."

Southern Snow
by Nancy Hatch Woodward
"There's a silence in a snowy dawn that forces you to look anew at what has been transformed from the customary landscape of your day- to- day life. Dogwoods glisten in their silver finery; bowing fir limbs form a secret cathedral." 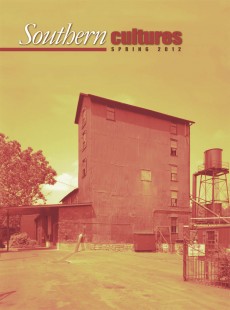