Our Fall 2013 special issue commemorates the Sesquicentennial of the Civil War. Featuring essays on the birth of photojournalism at the Battle of Antietam, the struggle over history and memory in the pages of Confederate Veteran Magazine, a historian's-eye-view of Charleston's Secession Ball, poetry from the Poet Laureate of the United States, Civil War remembrances from the Southern Oral History Program, and much more.

Front Porch
by Harry L. Watson
"The most powerful memories of the Civil War continue to be the personal stories, and while the transmission may be sputtering today, they remain the most evocative, both of the winners' frail victories and the losers' human pain."

Uncovering the Confederacy of the Mind
Or, How I Became a Belle of the Ball in Denmark Vesey's Church
by Blain Roberts
"We started to wonder: did twenty-first-century Charleston have separate—even segregated—tourism industries, one that focused on the city's white history and another that told of its black past?"

"The Great Weight of Responsibility"
The Struggle over History and Memory in Confederate Veteran Magazine
by Steven E. Sodergren
"'In the name of the future manhood of the South I protest. What are we to teach them? If we cannot teach them that their fathers were right, it follows that these Southern children must be taught that they were wrong.'"

The Revenant
photographs by Matthew P. Shelton
"I drilled until the book was lace."

Rebecca Harding Davis's Human Stories of the Civil War
by Mark Canada
"'The war is surging up close about us.—O . . . if I could put into your and every true woman's heart the inexpressible loathing I have for it! If you could only see the other side enough to see the wrong the tyranny on both!'"

Maffitt, May 1861–September 1862
An excerpt from Two Captains from Carolina: Moses Grandy, John Newland Maffitt, and the Coming of the Civil War
by Bland Simpson
"'No war? I have come to you directly from Washington City, where the caissons are rolling, where a great army has been gathering, where Lincoln is planning for war. Whether you are or not.'"

"Truthful as the Record of Heaven"
The Battle of Antietam and the Birth of Photojournalism
by John M. Harris
"'Let him who wishes to know what war is look at this series of illustrations. These wrecks of manhood thrown together in careless heaps or ranged in ghastly rows for burial were alive but yesterday.'"

"Mississippi's Greatest Hour"
The Mississippi Civil War Centennial and Southern Resistance
by Alyssa D. Warrick
"From the outset, Mississippi's commission had a clear goal, evinced by its name. The Mississippi Commission on the War Between the States was unapologetically pro-Confederate, though willing to acknowledge, however begrudgingly, the Union victory."

Voices from the Southern Oral History Program
"I Know It by Heart"
The Civil War in the Memories of John W. Snipes, Ralph W. Strickland, Edith
Mitchell Dabbs, and Reginald Hildebrand
interviewed by Brent Glass, Lu Ann Jones, Elizabeth Jacoway Burns, and Rob Stephens
compiled and introduced by Rachel F. Seidman
"'When my husband James was growing up, there was no race question. They assumed that was settled by the war. The Negroes were slaves and then they weren't. That settled it.'"

Mason-Dixon Lines
Elegy for the Native Guards
poetry by Natasha Trethewey
". . . 2nd Regiment, Union men, black phalanx.
What is monument to their legacy?" 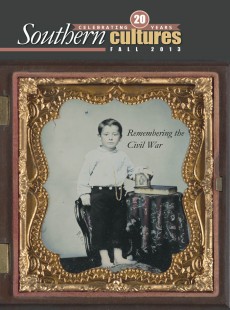