The Cruel Radiance of the Obvious, The 2011 Photography Issue
Tom Rankin, Guest Editor

Front Porch
by Harry L. Watson
"It requires very special talent to make great photographs, and those who have it are among our finest artists."

The Cruel Radiance of the Obvious
by Tom Rankin
"Photography in its finest and most decisive moments is about those tired or ignored or unseen parts of our lives, the mundane and worn paths that sit before us so firmly that we cease to notice. It is, we might say, about rebuilding our sight in the face of blindness, of recovering our collective vision."

American Studies
by Michael Carlebach
"Many years ago I concluded that for me truth and beauty, and perhaps wit and wisdom as well, are more likely to reside in what is ordinary and seemingly insignificant. This is, perhaps, a sideways look at America and American culture, but it is one that can produce moments that describe us all, but without makeup and bereft of a spokesperson."

Mapping The Democratic Forest
The Postsouthern Spaces of William Eggleston
by Ben Child
"When the color photographs of William Eggleston first appeared at the Museum of Modern Art in 1976, the boldness of Eggleston's palette and his disregard for the conventions of black-and-white photography were shocking; nearly all the major critics were scornful, and Ansel Adams wrote a scathing letter of protest."

Stereo Propaganda
by Lynn Marshall-Linnemeier
"In this examination, magic and myth-two of my favorite vehicles-act as buffers to the dominant power structure. It brings together two bodies of collectibles, one personal and one commercial, with the intent of shifting stereotypes about race and southern culture."

Interview
"Those little color snapshots": William Christenberry
interviewed by William R. Ferris
"Santa Claus had brought me and my sister a small Brownie camera in the late 1940s, and I just loaded it with color film and went out to that Alabama landscape and began to photograph what caught my eye."

Women Working
by Susan Harbage Page
"'Rough. It is rough being a female.'"

Not Forgotten
The Day Is Past and Gone
Family Photographs from Eastern North Carolina
By Scott Matthews
"'It is in fact hard to get the camera to tell the truth; yet it can be made to, in many ways and on many levels. Some of the best photographs we are ever likely to see are innocent domestic snapshots.'"

All eight articles from this issue of Southern Cultures are also available individually as stand-alone ebooks. 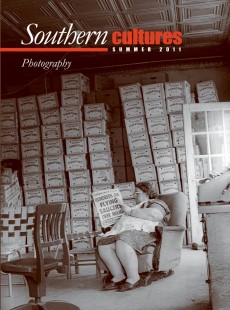