In the Fall 2012 issue of Southern Cultures…

Five Big Things You Need to Know About the South for this Election
The Past, Present, and Future of Southern Politics
Jack Bass on Citizens United, Strom Thurmond, the Southern Strategy, and Jackie O
Control of Public Schools and the Politics of Desegregation
The South in the Shadow of Nazism
Documenting the Political Immigrant Debate Today
Bill Clinton on . . . Bill Clinton
. . . and more. 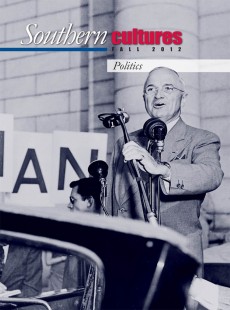