In the Spring 2012 issue of Southern Cultures…

Guest editor Marcie Cohen Ferris brings together some of the best new writing on Southern food for the Summer 2012 issue of Southern Cultures , which features an interview with TREME writer Lolis Elie and Ferris's own retrospective on Southern sociology, the WPA, and Food in the New South. The Food issue includes Rebecca Sharpless on Southern women and rural food supplies, Bernard Herman on Theodore Peed's Turtle Party, Will Sexton's "Boomtown Rabbits: The Rabbit Market in Chatham County, North Carolina," Courtney Lewis on how the "Case of the Wild Onions" paved the way for Cherokee rights, poetry by Michael Chitwood, and much more. 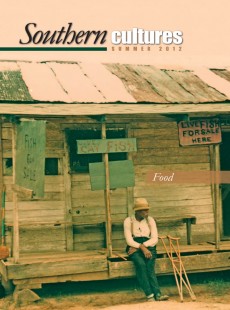