The South's leading liberal journalists came from varied backgrounds and lived in different regions of the South, but all had one characteristic in common: as public advocates of southern liberalism, each spoke as a southerner with deep roots in the southern past. Yet their editorials were not intended solely for local audiences; they wrote essays for national and regional journals of opinion as well, and each of these men published important books on the South and its history. Through their writings, they gained reputations throughout the country as articulate spokesmen for southern liberalism.

Their essays, editorials, books, and letters provide rich and abundant sources for studying the changing patterns of southern liberal thought in the critical years from the 1920s to the 1940s. Moreover, these journalists were members of southern liberal organizations -- Will W. Alexander's Commission on Interracial Cooperation, the Southern Commission on the Study of Lynching, the Southern Policy Committee, the Southern Conference for Human Welfare, and the Southern Regional Council -- and so they helped devise the reform programs that they in turn publicized.

While they believed that social and economic change in the modern South required reform of race relations, the journalists felt that these reforms could be accommodated within the framework of racial segregation. The protests of blacks against segregation during World War II challenged that way of thinking and created a crisis for southern liberals. Kneebone analyzes this crisis and the disconnection between the southern liberalism of the 1920s and 1930s and the Civil Rights movement. 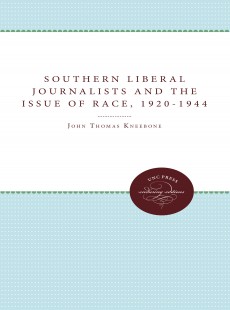 Southern Liberal Journalists and the Issue of Race, 1920-1944