The election of Abraham Lincoln as president in 1860 initiated a heated debate throughout the South about what Republican control of the federal government would mean for the slaveholding states. During the secession crisis of the winter of 1860-61, Southerners spoke out and wrote prolifically on the subject, publishing their views in pamphlets that circulated widely. These tracts constituted a regional propaganda war in which Southerners vigorously debated how best to react to political developments on the national level. In this valuable reference work, Jon Wakelyn has collected twenty representative examples of this long-overlooked literature. Although the pamphlets reflect deep differences of opinion over what Lincoln's intentions were and how the South should respond, all indicate the centrality of slavery to the Southern way of life and reflect a pervasive fear of racial unrest. More generally, the pamphlets reveal a wealth of information about the South's political thought and self-identity at a defining moment in American history. The twenty items included here represent the views of leaders and opinion makers throughout the slaveholding states and are fully annotated. An additional sixty-five pamphlets are listed and briefly described in an appendix. 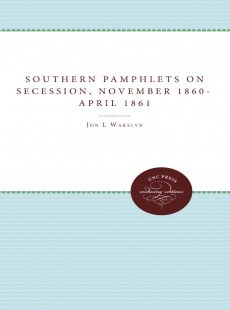