This volume is the first comprehensive history of the evolving relationship between American slavery and the law from colonial times to the Civil War. As Thomas Morris clearly shows, racial slavery came to the English colonies as an institution without strict legal definitions or guidelines. Specifically, he demonstrates that there was no coherent body of law that dealt solely with slaves. Instead, more general legal rules concerning inheritance, mortgages, and transfers of property coexisted with laws pertaining only to slaves. According to Morris, southern lawmakers and judges struggled to reconcile a social order based on slavery with existing English common law (or, in Louisiana, with continental civil law.) Because much was left to local interpretation, laws varied between and even within states. In addition, legal doctrine often differed from local practice. And, as Morris reveals, in the decades leading up to the Civil War, tensions mounted between the legal culture of racial slavery and the competing demands of capitalism and evangelical Christianity. 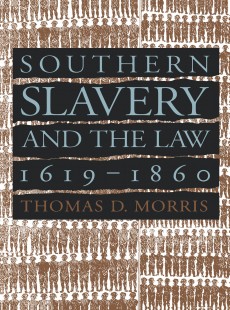