On December 22, 1964, at a small, closely guarded airstrip in the desert town of Palmdale, California, Lockheed test pilot Bob Gilliland stepped into a strange-looking aircraft and roared into aviation history.

Developed at the super-secret Skunk Works, the SR-71 Blackbird was a technological marvel. In fact, more than a half century later, the Mach 3–plus titanium wonder, designed by Clarence L. “Kelly” Johnson, remains the world’s fastest jet.

It took a test pilot with the right combination of intelligence, skill, and nerve to make the first flight of the SR-71, and the thirty-eight-year-old Gilliland had spent much of his life pushing the edge.

In Speed one of America’s greatest test pilots collaborates with acclaimed journalist Keith Dunnavant to tell his remarkable story: How he was pushed to excel by his demanding father. How a lucky envelope at the U.S. Naval Academy altered the trajectory of his life. How he talked his way into U.S. Air Force fighters at the dawn of the jet age, despite being told he was too tall. How he made the conscious decision to trade the security of the business world for the dangerous life of an experimental test pilot, including time at the clandestine base Area 51, working on the Central Intelligence Agency’s Oxcart program.

The narrative focuses most intently on Gilliland’s years as the chief test pilot of the SR-71, as he played a leading role in the development of the entire fleet of spy planes while surviving several emergencies that very nearly ended in disaster.

Waging the Cold War at 85,000 feet, the SR-71 became an unrivaled intelligence-gathering asset for the U.S. Air Force, invulnerable to enemy defenses for a quarter century.

Gilliland’s work with the SR-71 defined him, especially after the Cold War, when many of the secrets began to be revealed and the plane emerged from the shadows—not just as a tangible museum artifact but as an icon that burrowed deep into the national consciousness.

Like the Blackbird itself, Speed is a story animated by the power of ambition and risk-taking during the heady days of the American Century. 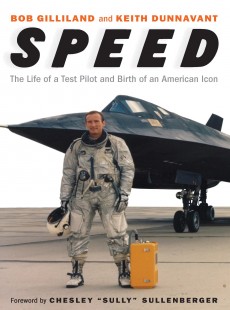