This indispensable Civil War reference profiles some 2,300 staff officers in Robert E. Lee's famous Army of Northern Virginia. These men--ordnance officers, engineers, aides-de-camp, and quartermasters, among others--worked at the side of many of the Confederacy's greatest figures, helping to feed and clothe the army, maintain its discipline, and operate its military machinery.

A typical entry includes the officer's full name, the date and place of his birth and death, details of his education and occupation, and a synopsis of his military record. An introduction discusses the role of staff officers in the Confederate army, describes the evolution and importance of individual staff positions, and makes some broad generalizations about the officers' common characteristics. Two appendixes provide a list of more than 3,000 staff officers who served in other armies of the Confederacy and complete rosters of known staff officers of each general in the Army of Northern Virginia.

Synthesizing the contents of thousands of unpublished official documents, Staff Officers in Gray will be of interest to anyone studying the battles, personnel, and organization of the Army of Northern Virginia. 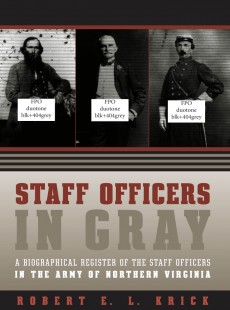