It is October 1592. Christopher Marlowe, the most accomplished playwright in London, has written The Massacre at Paris for his company, the Lord Admiral's Men. Bubonic plague has hit outlying parishes, forcing theaters to close and postponing the season. Ordinarily, the Rose Theatre would debut Marlowe's work, but its subject—the St. Bartholomew Day's Massacre—is unpleasant and might inflame hostilities against Catholics and their sympathizers, such as merchants on whom trade depends. A new company, the Lord Strange's Men, boasts a young writer, William Shakespeare, who is said to have several barnburners in the queue. A competition is called to decide which company will reopen the theaters. Who will most effectively represent the nation's ideals and energies, its humor and grandeur? One troupe will gain supremacy, primarily for literary but also for cultural, religious, and political reasons.

Free supplementary materials for this textbook are available at the Reacting to the Past website. Visit https://reacting.barnard.edu/instructor-resources, click on the RTTP Game Library link, and  create a free account to download what is available. 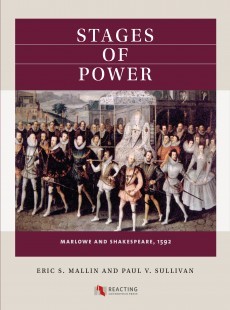