Despite its avowed commitment to liberalism and democracy internationally, the United States has frequently chosen to back repressive or authoritarian regimes in parts of the world. In this comprehensive examination of American support of right-wing dictatorships, David Schmitz challenges the contention that the democratic impulse has consistently motivated U.S. foreign policy.
Compelled by a persistent concern for order and influenced by a paternalistic racism that characterized non-Western peoples as vulnerable to radical ideas, U.S. policymakers viewed authoritarian regimes as the only vehicles for maintaining political stability and encouraging economic growth in nations such as Nicaragua and Iran, Schmitz argues. Expediency overcame ideology, he says, and the United States gained useful--albeit brutal and corrupt--allies who supported American policies and provided a favorable atmosphere for U.S. trade.
But such policy was not without its critics and did not remain static, Schmitz notes. Instead, its influence waxed and waned over the course of five decades, until the U.S. interventions in Vietnam marked its culmination. 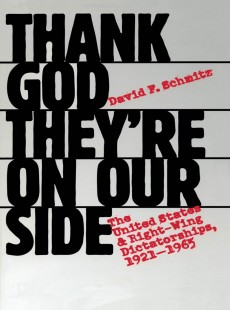 Thank God They're on Our Side

The United States and Right-Wing Dictatorships, 1921-1965