In this study of racial passing literature, Julia S. Charles highlights how mixed-race subjects invent cultural spaces for themselves—a place she terms that middle world—and how they, through various performance strategies, make meaning in the interstices between the Black and white worlds. Focusing on the construction and performance of racial identity in works by writers from the antebellum period through Reconstruction, Charles creates a new discourse around racial passing to analyze mixed-race characters' social objectives when crossing into other racialized spaces. To illustrate how this middle world and its attendant performativity still resonates in the present day, Charles connects contemporary figures, television, and film—including Rachel Dolezal and her Black-passing controversy, the FX show Atlanta, and the musical Show Boat—to a range of nineteenth- and early twentieth-century literary texts. Charles's work offers a nuanced approach to African American passing literature and examines how mixed-race performers articulated their sense of selfhood and communal belonging. 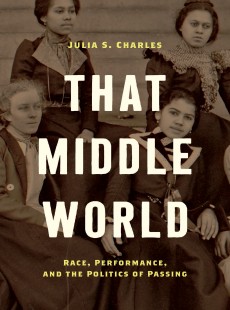 Race, Performance, and the Politics of Passing