Fought on 13 December 1862, the battle of Fredericksburg ended in a stunning defeat for the Union. Confederate general Robert E. Lee suffered roughly 5,000 casualties but inflicted more than twice that many losses--nearly 13,000--on his opponent, General Ambrose Burnside. This Civil War Short offers George Rable's gripping account of the battle itself. The selection is drawn from Rable's comprehensive book, Fredericksburg! Fredericksburg!, which traces the impact of the battle well beyond the end of the fighting, offering a sense of how the horrific carnage haunted survivors--both civilian and military--on both sides. 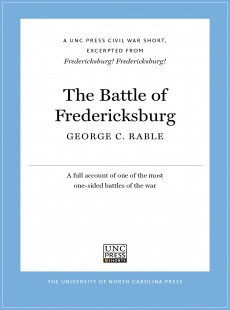 The Battle of Fredericksburg