Grover Cleveland Alexander was one of the greatest pitchers in baseball history, with 373 career victories during twenty seasons in the Major Leagues. Elected into the National Baseball Hall of Fame in 1938, the right-hander remains a compelling—and tragic—figure. "Pete" Alexander's military service during World War I was the demarcation line between his great seasons with the Philadelphia Phillies and his years of struggle and turmoil with the Chicago Cubs and the St. Louis Cardinals after the Great War. Indeed, Alexander's service during World War I has all but been forgotten, even though it dramatically changed his life—and his game. Alexander served in the 342nd Field Artillery Regiment, which included big leaguers and star athletes among its officers and men. Naturally, the regiment fielded an outstanding baseball team, but it also faced hard service during the final weeks of the war. After the armistice in November 1918, the unit undertook occupation duty in Germany.The Best Team Over There examines this crucial period closely: where Alexander was stationed, how he was trained, how he withstood the effects of combat and shelling, how he interacted with his fellow athletes and soldiers, and how the war changed his baseball career, revealing for the first time the little-known details of this critical stage in the legendary pitcher's life and career. We can't truly understand Alexander and his enduring appeal to baseball fans without also understanding his life as a gunner and soldier. 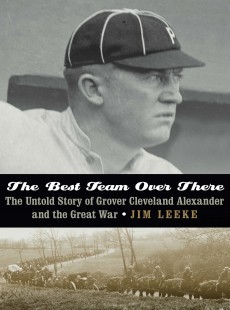 The Best Team Over There

The Untold Story of Grover Cleveland Alexander and the Great War