As America lurched into the twentieth century, its national pastime was afflicted with the same moral malaise that was enveloping the rest of the nation. Players regularly bet on games, games were routinely fixed, and league politics were as dirty as the base paths. Against this backdrop, Hal Chase emerged as one of the game's greatest players and also as one of its most scandalous characters. With charisma and bravado that earned him the nickname The Prince, Chase charmed his way across America, spinning lies in the afternoon, dealing high-stakes poker at night, and gambling with beautiful women until dawn. Most notoriously of all, he undermined his stature as the era's greatest first baseman by conniving with gamblers to fix games and draw teammates into his diamond conspiracies. But as Donald Dewey and Nicholas Acocella reveal in their groundbreaking biography, The Black Prince of Baseball, Chase was also a scapegoat for baseball notables with hands even dirtier than his. These included league officials who ignored facts in an attempt to pin the 1919 Black Sox scandal on him and—a previously unknown twist—the fabled John McGraw, who perjured himself on a witness stand against the first baseman. Although Chase, contrary to popular belief, was never banned from the major leagues, meticulous research by the authors implicates him in other shady enterprises as well, not least an attempt to blackmail revivalist Aimee Semple McPherson. As The Black Prince of Baseball makes clear, in his protean talents and larcenies, Hal Chase personified all the excesses of Ragtime. 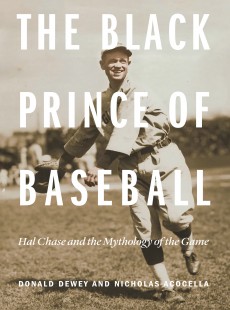 The Black Prince of Baseball

Hal Chase and the Mythology of the Game