Born in Lincolnton, North Carolina, in 1837, Stephen Dodson Ramseur rose meteorically through the military ranks. Graduating from West Point in 1860, he joined the Confederate army as a captain. By the time of his death near the end of the war at the Battle of Cedar Creek, he had attained the rank of major general in the Army of Northern Virginia. He excelled in every assignment and was involved as a senior officer in many of the war's most important conflicts east of the Appalachians.

Ramseur's letters--over 180 of which are collected and transcribed here by George Kundahl--provide his incisive observations on these military events. At the same time, they offer rare insight into the personal opinions of a high-ranking Civil War officer. Correspondence by Civil War figures is often strictly professional. But in personal letters to his wife, Nellie, and best friend, David Schenk, Ramseur candidly expresses beliefs about the social, military, and political issues of the day. He also shares vivid accounts of battle and daily camp life, providing colorful details on soldiering during the war. 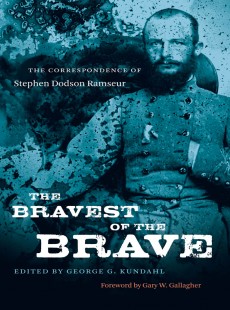 The Bravest of the Brave

The Correspondence of Stephen Dodson Ramseur