In 1867 conservative estimates put the number of buffaloes in the trans-Missouri region at fifteen million. By the end of the 1880s, that figure had dwindled to a few hundred. The destruction of the great herds is the theme of The Buffalo Hunters. Mari Sandoz’s vast canvas is charged with color and excitement—accounts of Indian ambushes, hairbreadth escapes, gambling and gunfights, military expeditions, and famous frontier characters such as Wild Bill Hickok, Lonesome Charlie Reynolds, Buffalo Bill, Sheridan, Custer, and Indian chiefs Whistler, Yellow Wolf, Spotted Tail, and Sitting Bull. 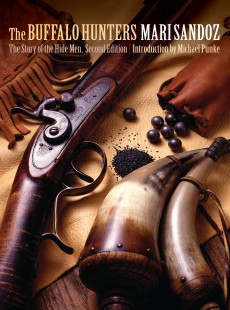 The Story of the Hide Men, Second Edition