During World War II, hundreds of thousands of prisoners were worked to death by the Nazis under a brutal system of slave labor in the concentration camps. By 1942, this vast network of slavery extended across all of German-occupied Europe, but the whole operation was run by a surprisingly small staff of bureaucrats--no more than 200 engineers and managers who worked in the Business Administration Main Office of the SS. Their projects included designing and constructing the concentration camps and gas chambers, building secret underground weapons factories, and brokering slave laborers to private companies such as Volkswagen and IG Farben.

The Business of Genocide powerfully contradicts the assumption that the SS forced slavery upon the German economy, demonstrating that instead industrialists actively sought out the Business Administration Main Office as a valued partner in the war economy. Moreover, while the bureaucrats who oversaw Holocaust operations have often been seen as technocrats or simple "cogs in the machinery," the book reveals their ideological dedication, even fanatical devotion, to slavery and genocide in the name of National Socialism. 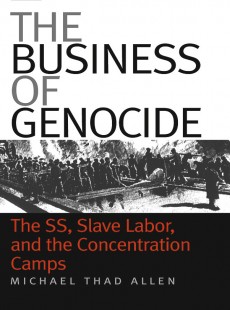 The Business of Genocide

The SS, Slave Labor, and the Concentration Camps