Children--white and black, northern and southern--endured a vast and varied range of experiences during the Civil War. Children celebrated victories and mourned defeats, tightened their belts and widened their responsibilities, took part in patriotic displays and suffered shortages and hardships, fled their homes to escape enemy invaders and snatched opportunities to run toward the promise of freedom.
Offering a fascinating look at how children were affected by our nation's greatest crisis, James Marten examines their toys and games, their literature and schoolbooks, the letters they exchanged with absent fathers and brothers, and the hardships they endured. He also explores children's politicization, their contributions to their homelands' war efforts, and the lessons they took away from the war. Drawing on the childhoods of such diverse Americans as Jane Addams, Booker T. Washington, and Theodore Roosevelt, and on sources that range from diaries and memoirs to children's "amateur newspapers," Marten examines the myriad ways in which the Civil War shaped the lives of a generation of American children.


"An original-minded, skillfully and suggestively presented history, haunting in its detailed unfolding of a war that put so many already vulnerable youngsters in danger, but elicited from some of them, as well, impressively sensitive, responsive thoughts, gestures, and deeds in what became, as this extraordinary book's title insists, their civil war.--Journal of American History

"James Marten's thoroughly researched and engagingly written study . . . stands as one of the most exciting studies to emerge in the last dozen years. . . . Marten has taken a topic ignored by both Civil War historians and historians of childhood and crafted an engaging, masterful, nuanced, and readable study that will not quickly leave the reader's mind or heart.--American Studies

"The first comprehensive account of Civil War children. . . . Thoroughly researched and nicely illustrated, The Children's Civil War will be a touchstone for historians and generalists who seek to gain a fuller understanding of life on the home front between 1861 and 1865.--Civil War History

The Children's Civil War is a poignant and fascinating look at childhood during our nation's greatest crisis. Using sources that include diaries, memoirs, and letters, James Marten examines the wartime experiences of young people--boys and girls, black and white, northern and southern--and traces the ways in which the Civil War shaped the lives of a generation of American children. --> 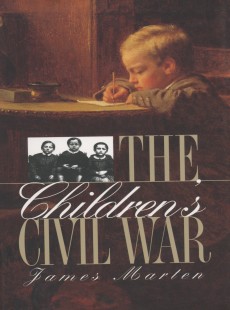