In a story that spans from the founding of immigrant parishes in the early twentieth century to the rise of the Chicano civil rights movement in the early 1970s, Roberto R. Trevino discusses how an intertwining of ethnic identity and Catholic faith equipped Mexican Americans in Houston to overcome adversity and find a place for themselves in the Bayou City.

Houston's native-born and immigrant Mexicans alike found solidarity and sustenance in their Catholicism, a distinctive style that evolved from the blending of the religious sensibilities and practices of Spanish Christians and New World indigenous peoples. Employing church records, newspapers, family letters, mementos, and oral histories, Trevino reconstructs the history of several predominately Mexican American parishes in Houston. He explores Mexican American Catholic life from the most private and mundane, such as home altar worship and everyday speech and behavior, to the most public and dramatic, such as neighborhood processions and civil rights marches. He demonstrates how Mexican Americans' religious faith helped to mold and preserve their identity, structured family and community relationships as well as institutions, provided both spiritual and material sustenance, and girded their long quest for social justice. 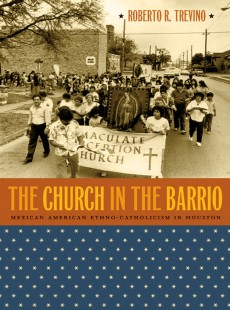 The Church in the Barrio