A century ago, daily life ground to a halt when the circus rolled into town. Across America, banks closed, schools canceled classes, farmers left their fields, and factories shut down so that everyone could go to the show. In this entertaining and provocative book, Janet Davis links the flowering of the early-twentieth-century American railroad circus to such broader historical developments as the rise of big business, the breakdown of separate spheres for men and women, and the genesis of the United States' overseas empire. In the process, she casts the circus as a powerful force in consolidating the nation's identity as a modern industrial society and world power.

Davis explores the multiple "shows" that took place under the big top, from scripted performances to exhibitions of laborers assembling and tearing down tents to impromptu spectacles of audiences brawling, acrobats falling, and animals rampaging. Turning Victorian notions of gender, race, and nationhood topsy-turvy, the circus brought its vision of a rapidly changing world to spectators--rural as well as urban--across the nation. Even today, Davis contends, the influence of the circus continues to resonate in popular representations of gender, race, and the wider world. 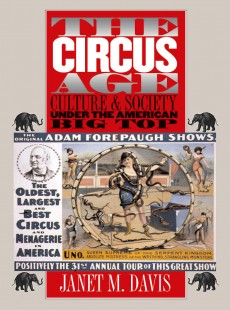 Culture and Society under the American Big Top