Eleven battles and seventy-three skirmishes were fought in North Carolina during the Civil War. Although the number of men involved in many of these engagements was comparatively small, the campaigns and battles themselves were crucial in the grand strategy of the conflict and involved some of the most famous generals of the war. John Barrett presents the complete story of military engagements across the state, including the classical pitched battle of Bentonville, the siege of Fort Fisher, the amphibious campaigns on the coast, and cavalry sweeps such as Stoneman's raid. From and through North Carolina, men and supplies went to Lee's army in Virginia, making the Tar Heel state critical to Lee's ability to remain in the field during the closing months of the war, when the Union had cut off the West and Gulf South. This dependence upon North Carolina led to Stoneman's cavalry raid and Sherman's march through the state in 1865, the latter of which brought the horrors of total war and eventual defeat. 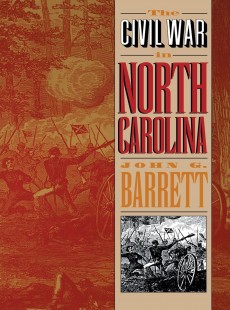 The Civil War in North Carolina