In the late nineteenth century, migrants from Jamaica, Colombia, Barbados, and beyond poured into Caribbean Central America, building railroads, digging canals, selling meals, and farming homesteads. On the rain-forested shores of Costa Rica, U.S. entrepreneurs and others established vast banana plantations. Over the next half-century, short-lived export booms drew tens of thousands of migrants to the region. In Port Limon, birthplace of the United Fruit Company, a single building might house a Russian seamstress, a Martinican madam, a Cuban doctor, and a Chinese barkeep--together with stevedores, laundresses, and laborers from across the Caribbean.

Tracing the changing contours of gender, kinship, and community in Costa Rica's plantation region, Lara Putnam explores new questions about the work of caring for children and men and how it fit into the export economy, the role of kinship as well as cash in structuring labor, the social networks that shaped migrants' lives, and the impact of ideas about race and sex on the exercise of power. Based on sources that range from handwritten autobiographies to judicial transcripts and addressing topics from intimacy between prostitutes to insults between neighbors, the book illuminates the connections between political economy, popular culture, and everyday life. 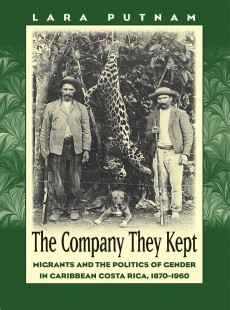 The Company They Kept

Migrants and the Politics of Gender in Caribbean Costa Rica, 1870-1960