This is the story of a region at once representative and unique in the history of Southern culture, which was from its earliest colonial beginnings a focus of strength, intellect, and proud individuality.

Warren County, North Carolina, heart of the Roanoke Region, early built for grace and vigor. It bred people who were great in the affairs of the state and the nation. Resolutely it fought for freedom from England, was a harbor of antebellum grace and vigor, sent its sons into the forefront of Civil War battles, weathered Reconstruction's woes, and strove to sustain its ancient tradition of greatness while keeping step with modernity in the world.

Here are remembered the beginnings in a primitive wilderness, the pioneer region that grew into a rich empire of luxury and intellectualism, the county that weathered disasters and won deserved rewards. The events of its life as a locality, with the men and women who created those events, are here retold. Warren County's special record of mannered culture and robust folkways, its parade of hunters, builders, scholars, statesmen, soldiers, belles and beaux, wits and merrymakers, its progress and change as noted in five different centuries, are set forth from authentic sources. 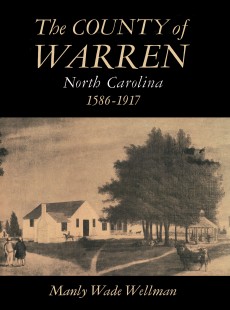