The Croatan Indians of Sampson County, NC, written by George Edwin Butler (1868-1941) and composed only a year after Special Indian Agent Orlando McPherson's Indians of North Carolina report, was an appeal to the state of North Carolina to create schools for the "Croatans" of Sampson County just as it had for those designated as Croatans in, for example, Robeson County, North Carolina. Butler's report would prove to be important in an evolving system of southern racial apartheid that remained uncertain of the place of Native Americans. It documents a troubled history of cultural exchange and conflict between North Carolina's native peoples and the European colonists who came to call it home. The report reaches many erroneous conclusions, in part because it was based in an anthropological framework of white supremacy, segregation-era politics, and assumptions about racial "purity." Indeed, Butler's colonial history connecting Sampson County Indians to early colonial settlers was used to legitimize them and to deflect their categorization as African-Americans. In statements about the fitness of certain populations to coexist with European-American neighbors and in sympathetic descriptions of nearly-white "Indians," it reveals the racial and cultural sensibilities of white North Carolinians, the persistent tensions between tolerance and self-interest, and the extent of their willingness to accept indigenous "Others" as neighbors. 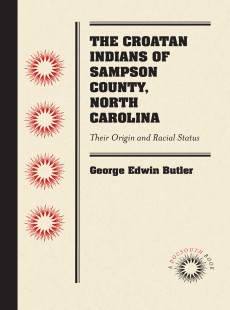 Their Origin and Racial Status