In this innovative work of cultural and technological history, Frieda Knobloch describes how agriculture functioned as a colonizing force in the American West between 1862 and 1945. Using agricultural textbooks, USDA documents, and historical accounts of western settlement, she explores the implications of the premise that civilization progresses by bringing agriculture to wilderness. Her analysis is the first to place the trans-Mississippi West in the broad context of European and classical Roman agricultural history. Knobloch shows how western land, plants, animals, and people were subjugated in the name of cultivation and improvement. Illuminating the cultural significance of plows, livestock, trees, grasses, and even weeds, she demonstrates that discourse about agriculture portrays civilization as the emergence of a colonial, socially stratified, and bureaucratic culture from a primitive, feminine, and unruly wilderness. Specifically, Knobloch highlights the displacement of women from their historical role as food gatherers and producers and reveals how Native American land-use patterns functioned as a form of cultural resistance. Describing the professionalization of knowledge, Knobloch concludes that both social and biological diversity have suffered as a result of agricultural 'progress.' 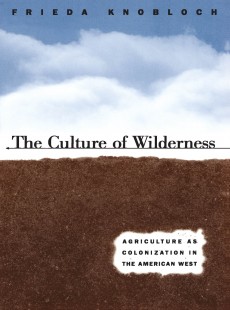 The Culture of Wilderness

Agriculture As Colonization in the American West