For more than a century, the term "Main Street" has conjured up nostalgic images of American small-town life. Representations exist all around us, from fiction and film to the architecture of shopping malls and Disneyland. All the while, the nation has become increasingly diverse, exposing tensions within this ideal. In The Death and Life of Main Street, Miles Orvell wrestles with the mythic allure of the small town in all its forms, illustrating how Americans continue to reinscribe these images on real places in order to forge consensus about inclusion and civic identity, especially in times of crisis.
Orvell underscores the fact that Main Street was never what it seemed; it has always been much more complex than it appears, as he shows in his discussions of figures like Sinclair Lewis, Willa Cather, Frank Capra, Thornton Wilder, Margaret Bourke-White, and Walker Evans. He argues that translating the overly tidy cultural metaphor into real spaces--as has been done in recent decades, especially in the new urbanist planned communities of Elizabeth Plater-Zyberk and Andres Duany--actually diminishes the communitarian ideals at the center of this nostalgic construct. Orvell investigates the way these tensions play out in a variety of cultural realms and explores the rise of literary and artistic traditions that deliberately challenge the tropes and assumptions of small-town ideology and life. 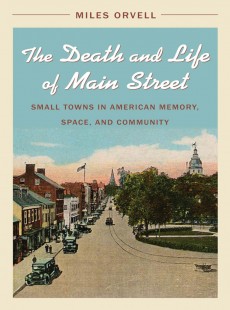 The Death and Life of Main Street