A Promethean technology is one that allows someone of average resources, skills, and intelligence to carry out actions that were once only doable by governments, militaries, or institutions with considerable resources. Essentially, Promethean technologies allow users to create their own weapons of mass destruction. These emerging technologies are increasingly affordable and accessible and are no more complicated to operate than a satellite TV control box or a smart phone. Although these technologies are a terrifying prospect, the more we know about these dangers, the better we can prepare to head them off. In The Devil's Toy Box, Andrew Fox lays out seven decades of preemptive analysis and shows that while homeland security has explored, in depth, the possible Promethean threats the world faces, it has failed to forecast the most likely attacks. Using fictional scenarios Fox teaches how to predict future threats and how to forecast which ones are likely to be used by bad actors within the next five to ten years. Combining the skills of homeland security experts and the imaginations of speculative fiction writers, he then offers an analytical method to deter, counter, or abate these threats, rather than adopting an attitude of resigned fatalism. 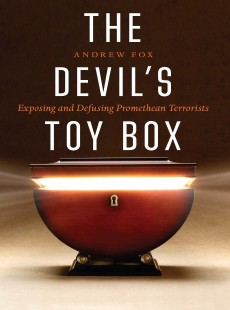