In 1948, a group of conservative white southerners formed the States' Rights Democratic Party, soon nicknamed the "Dixiecrats," and chose Strom Thurmond as their presidential candidate. Thrown on the defensive by federal civil rights initiatives and unprecedented grassroots political activity by African Americans, the Dixiecrats aimed to reclaim conservatives' former preeminent position within the national Democratic Party and upset President Harry Truman's bid for reelection. The Dixiecrats lost the battle in 1948, but, as Kari Frederickson reveals, the political repercussions of their revolt were significant.

Frederickson situates the Dixiecrat movement within the tumultuous social and economic milieu of the 1930s and 1940s South, tracing the struggles between conservative and liberal Democrats over the future direction of the region. Enriching her sweeping political narrative with detailed coverage of local activity in Alabama, Louisiana, Mississippi, and South Carolina--the flashpoints of the Dixiecrat campaign--she shows that, even without upsetting Truman in 1948, the Dixiecrats forever altered politics in the South. By severing the traditional southern allegiance to the national Democratic Party in presidential elections, the Dixiecrats helped forge the way for the rise of the Republican Party in the region. 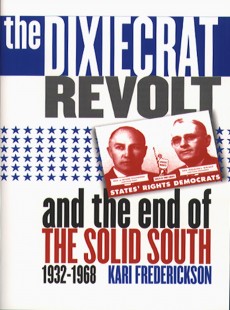