In 1876 Lakota and Cheyenne warriors annihilated Custer's Seventh Cavalry at Little Bighorn. Three years later and half a world away, a British force was wiped out by Zulu warriors at Isandhlwana in South Africa. In both cases the total defeat of regular army troops by forces regarded as undisciplined barbarian tribesmen stunned an imperial nation. Although the similarities between the two frontier encounters have long been noted, James O. Gump's book The Dust Rose Like Smoke is the first to scrutinize them in a comparative context. "This study issues a challenge to American exceptionalism," he writes. Viewing both episodes as part of a global pattern of intensified conflict in the latter 1800s resulting from Western domination over a vast portion of the globe, Gump's comparative study persuasively traces the origins and aftermath of both episodes. He examines the complicated ways in which Lakota and Zulu leadership sought to protect indigenous interests while Western leadership calculated their subjugation to imperial authority.  The second edition includes a new preface from the author, revised and expanded chapters, and an interview with Leonard Little Finger (great-great-grandson of Ghost Dance leader Big Foot), whose story connects Wounded Knee and Nelson Mandela. 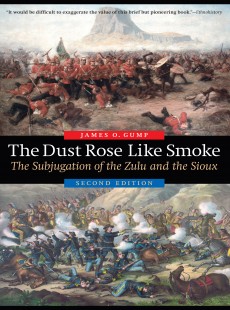 The Subjugation of the Zulu and the Sioux, Second Edition