In this eye-opening cultural history, Brian Tochterman examines competing narratives that shaped post–World War II New York City. As a sense of crisis rose in American cities during the 1960s and 1970s, a period defined by suburban growth and deindustrialization, no city was viewed as in its death throes more than New York. Feeding this narrative of the dying city was a wide range of representations in film, literature, and the popular press--representations that ironically would not have been produced if not for a city full of productive possibilities as well as challenges. Tochterman reveals how elite culture producers, planners and theorists, and elected officials drew on and perpetuated the fear of death to press for a new urban vision.

It was this narrative of New York as the dying city, Tochterman argues, that contributed to a burgeoning and broad anti-urban political culture hostile to state intervention on behalf of cities and citizens. Ultimately, the author shows that New York's decline--and the decline of American cities in general--was in part a self-fulfilling prophecy bolstered by urban fear and the new political culture nourished by it. 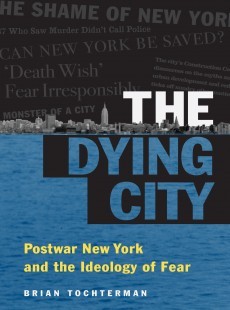 Postwar New York and the Ideology of Fear